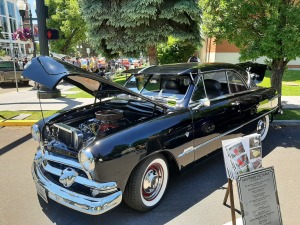 Rollins passed away on Sunday October 17, 2021 in Sky Lakes Medical Center with family by his side.

Frank was born on April 1, 1939 in Imperial Valley, California. Frank met the love of his life, Diane and mFrankarried her on June 27, 1959 in Glen Avon, California. It is here that he started his business adventures. He would regularly go to swap meets to sell his carpets and eventually he opened his first Surplus Store.

In 1972 he moved his family to Klamath Falls where he opened Frank and Diane's Carpets, which was nearly 50 years ago. They enjoyed one of the longest family owned Carpet Stores in Klamath Falls. Frank and Diane also opened up Carpet Stores in Alturas, and Burney, California. Throughout the years he owned, managed and remodeled many rental properties. Frank really enjoyed spending time with family and friends. He loved building classic cars for shows. He loved “junking” because he would find anything old and tear it apart to get the copper so he could sell it. He loved to watch Gunsmoke all the time and he loved to go to Casino's while traveling.

Frank and Diane were members of KC Squares for many years. One of his greatest joys was fishing and deer hunting every season with his sons and grand daughter.

Frank is survived by his wife Diane, his daughters Loretta, Patricia Frabotta and her two step children Ashley and Kristen, sons James and his wife, Debbie, Gary and his two daughters Kristin and Chelsea, brothers Gilbert Rollins of Phonix, Az. and Tommie Rollins of Riverside, Ca., six great grand children and many nieces and nephews.

To send flowers to the family or plant a tree in memory of Franklin, please visit our floral store.